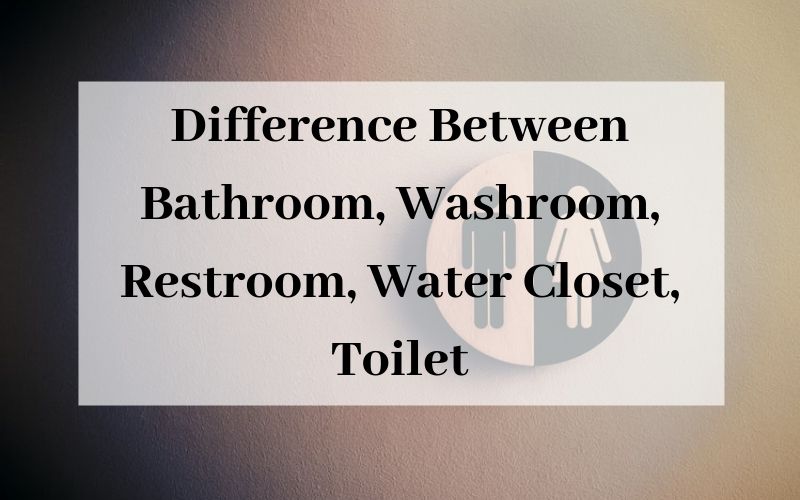 This article focuses on expatiating on the differences between a bathroom, washroom, restroom, water closet, and toilet. The reason for this is that despite what most people might think, they do not know the actual difference.

A bathroom refers to a room within a house or a hotel which is used for personal hygiene activities. Usually, the components of a bathroom include a toilet, a sink (which could also be called a basin), a shower or a bathtub or even both, however, there must be at least one of the two. Depending on the country, someplace their toilets within the bathroom while some others consider this to be unhygienic and therefore do not support the placement of the toilet within the bathroom. In such countries or cultures as this, there usually have a separate room to place the toilet in.

In certain cases, the toilet may even be outside the house such as houses that make use of pit latrines. The space available in the house is also a determinant of whether or not the toilet would be placed within the bathroom or not. Therefore, the major event that is bound to take place in a bathroom is bathing. In certain cultures, bathing was a collective activity which implies that they used to have a large space to be used as a bathroom due to the sheer number of people bathing at the same time. In some other places such as North America, the word “bathroom” is used for any room that contains a toilet even if it is a public toilet. 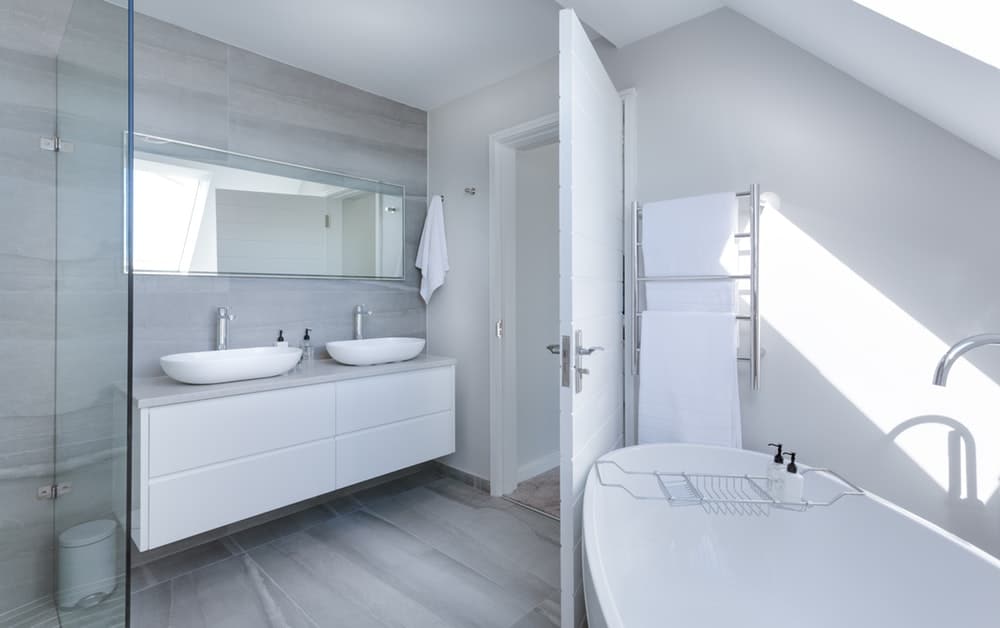 Bathrooms usually have one or more towel rings or bars solely for hanging towels. Similarly, some bathrooms contain pieces of furniture such as bathroom cabinets for keeping personal hygiene products and even medicines. They also contain shelves or drawers which are useful for storage of towels and certain other items. Basically, a bathroom must contain fixtures for the use of both hot and cold water which would be used for cleaning the body and for the movement of human solid or liquid waste to a septic tank. The floor, wall and ceiling materials should be impervious to water and easy to clean and the materials used should make for easy cleaning too. You may also check our article on Why Do You Have Mold in Your Bathroom and What To Do About It

In official settings, washrooms are the most commonly found personal hygiene rooms. There are also restrooms, but while washrooms are solely for personal hygiene purposes, restrooms are for just what the name denotes. They are specially designed for people who are tired and want a break to go there and rest a bit although they also contain public convenience facilities. As a matter of fact, there are certain countries that mandate the construction of restrooms for women which is what is known now as the ladies’ room. The major difference between the washrooms and the restroom depends on the country in question. In spite of their assumed similarities, there are certainly major differences between them as well.

A washroom is basically a place that has facilities with which people can wash as well as relieve themselves. In other words, it can also be referred to as a bathroom of sorts. Washrooms usually have facilities such as hand basin, toilets, bathing facilities such as shower, and changing rooms; these are essential components of every washroom. They are usually found as installations or as stand-alones as well as a part of some large functional buildings such as restaurants or railway station. Most washrooms do not have attendants standing by to render any help, however, some washrooms could have a janitor or a grooming service while some even have an attendant but these are all dependent on the location of the washroom.

Furthermore, American English makes use of the word washroom for public convenience facilities found in public and commercial places. Meanwhile, the term bathroom is used for those found smaller and residential facilities. In Chicago and Canada, the washroom is still used in reference to public convenience facilities. In the United States, utility rooms are also referred to as washrooms however, the gender-specific washrooms are referred to as men’s and ladies’ rooms.

A restroom just as the name connotes, refers to a public convenience facility mainly designed for people to rest but with facilities for relieving oneself. It can more appropriately be called a public toilet. They are usually located in public places and consist of a number of multiple toilets that are not owned by any specific individual. Rather, it is available for use to anybody who needs to use it including customers, employees, travelers, students, etc. More often than not, they are made gender specific and males have a separate restroom from females, however, there are certain toilets which are made unisex and both men and women make use of the same facilities.

In addition, the name of this public facility usually depends on the country of location. It could be known as washrooms in Canada,  in Europe, it is known as ladies’ and gents depending on gender or lavatory, and restroom or men’s room and women’s room in the United States. Some of these restrooms are operated without charging any fee while some typically charge a sum for maintenance. For restrooms like this,  people have to pay before they make use of the facilities. Similarly, commercial businesses or local authorities could provide restroom facilities and while some do not have attendants, there are some that have actual attendants working there. 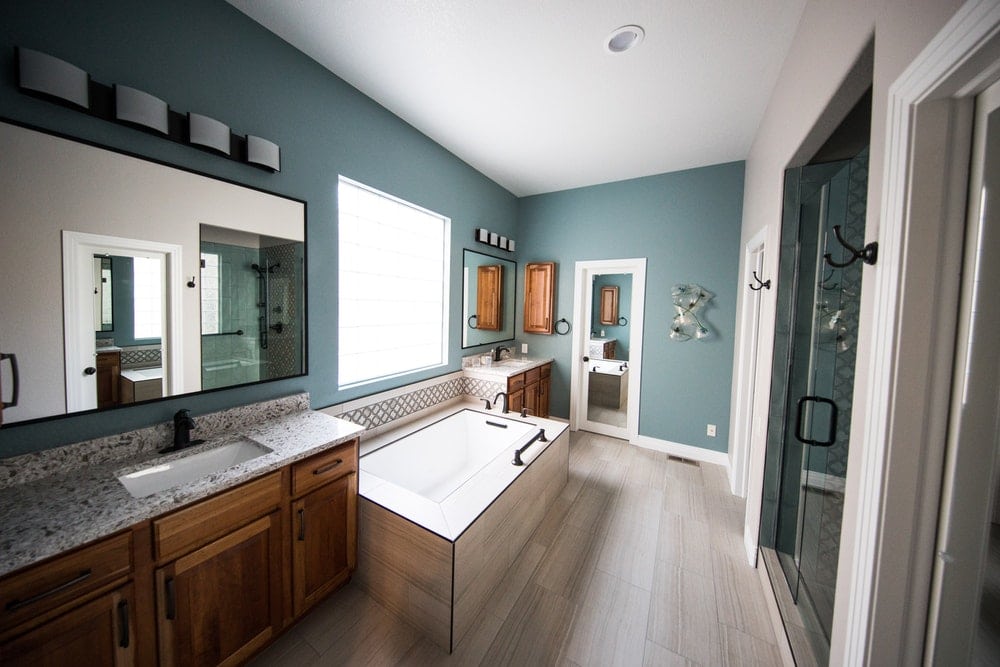 They are usually found at various locations including offices, universities, factories, schools, and other study locations. Similarly, they can be found in bars, cinemas, restaurants, museums and other entertainment venues. For people traveling, they can be found at railway stations, gas sales outlets, and transportation vehicles including ferries, trains, and planes which usually make provision for restrooms that can be used for basic hygiene purposes. They can be used for urination and defecation purposes. Similarly, people can wash their hands or make use of the mirror for grooming purposes. Refilling of water bottles and menstrual hygiene needs are also some common uses.

A water closet can also be known as a flushing toilet and is a toilet type that disposes of both solid and liquid human excreta by using water that comes with a measure of force to flush it through a drainpipe to another location. By doing this, a separation between humans and their excreta is successfully maintained. Basically, they are designed for sitting on and are called “Western” toilets in this case or for squatting which are called squat toilets. The direct opposite of the flush toilet or water closet is known as a dry toilet and unlike the water closet, the dry toilet requires no water for any form of flushing.

Flush toilets are a plumbing fixtures type and usually possess as part of the entire set up, an “S”, “J”, “U”, or “P” shaped bend which is known as a trap and allows for water collection within the toilet bowl while acting as a seal against noxious gases. Majority of flush toilets are directly connected to a sewerage system where the excreta end up and are then conveyed to a sewage treatment plant. If this fixture isn’t present, they are transported to a septic tank instead. Whenever the toilet is flushed, the wastewater could either be conveyed to a treatment plant or it flows into a septic tank.

The mode of operation of the water closet is pretty straightforward. The flush toilets which are made up of a fixed vitreous ceramic bowl have a drain to which it is connected. After the toilet has been used, the vitreous bowl gets emptied and cleaned by the water which is flowing rapidly into the bowl. The water used for the flush could be from a tank specified for this purpose or by manually pouring water with force into the water closet. Similarly, it could be from a high-pressure water pipe that is controlled by a flush valve. The valves are typically operated by the user and this can be done by either tugging on a chain, pulling a lever or pressing a button. 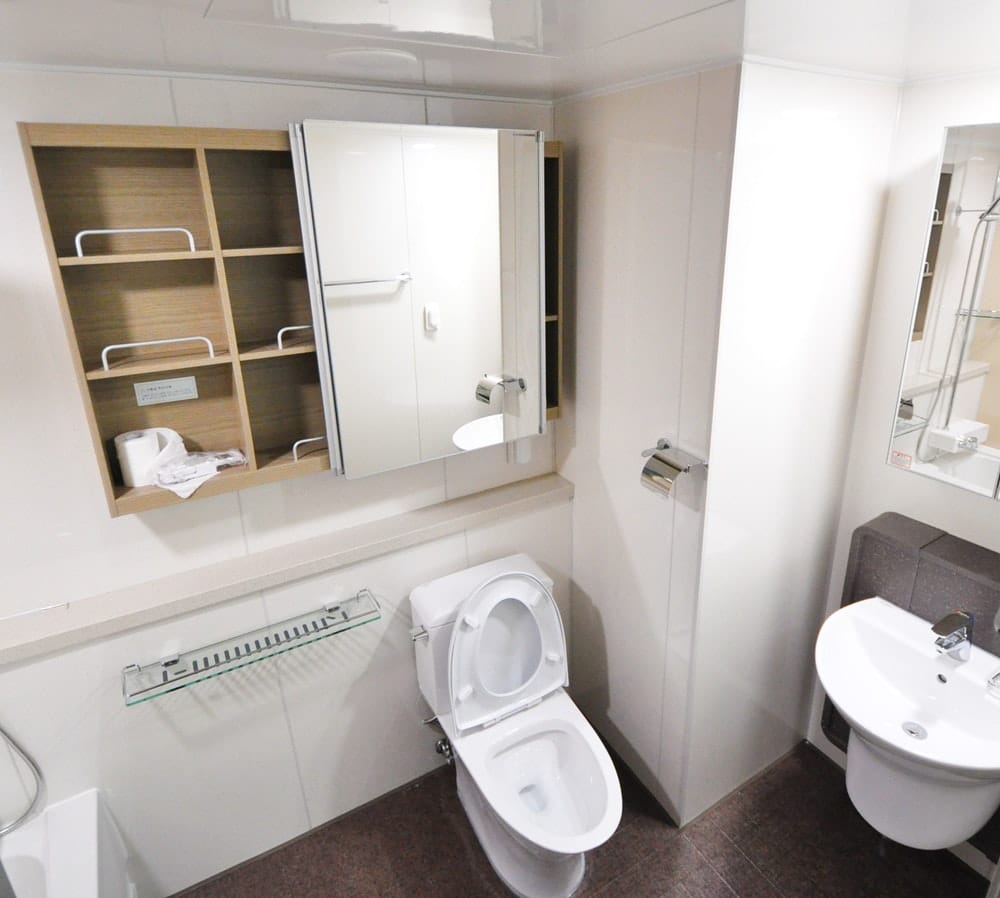 A toilet refers to a hardware piece that is mainly used for the disposal or collection of human feces and urine. This implies that the main function of toilets is for the safe and convenient process of defecation and urination. They are sanitation facilities that can be used with or without water. Toilets that require water are known as flush toilets or water closet while the ones that do not require water for operation are known as dry toilets. They are usually set up in different positions and including the sitting or squatting positions. Flush toilets are connected to some sewage treatment facility in urban areas, or to septic tanks.

On the other hand, dry toilets are connected to a removable container, pit, composting chamber or other treatment and storage sites. Toilets can be found almost everywhere humans can be found including prisons, offices, schools, homes, factories, etc. It is a known fact that humans would need to relieve themselves regularly, therefore, placing a toilet in locations where humans would at least be spending some time is of the highest importance.

Try to visit other articles like Best Rainfall Shower Head.